Veles is an Boss in Pagan Online. 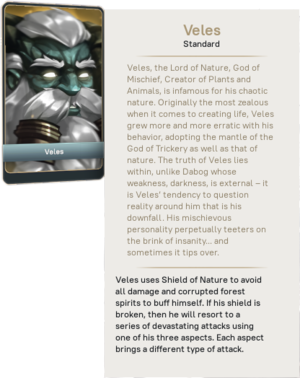 Veles, the Lord of Nature, God of Mischief, Creator of Plants and Animals, is infamous for his chaotic nature. Originally the most zealous when it comes to creating life, Veles grew more and more erratic with his behavior, adopting the mantle of the God of Trickery as well as that of nature. The truth of Veles lies within, unlike Dabog whose weakness, darkness, is external - it is Veles' tendency to question reality around him that is his downfall. His mischievous personality perpetually teeters on the brink of insanity... and sometimes it tips over.

Veles can be found in the following Campaign : The Mad God

Veles is involved in the following hunts: