Usud the Crypt Warden is a Boss in Pagan Online.

Boss With a lot of health that summons armies Of undead, Can inflict devastating blows With his scythe and has an arsenal of deadly spells and life leeches. He is immortal white he lingers in darkness, but vulnerable white he moves in light. 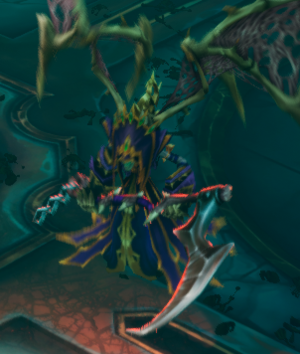 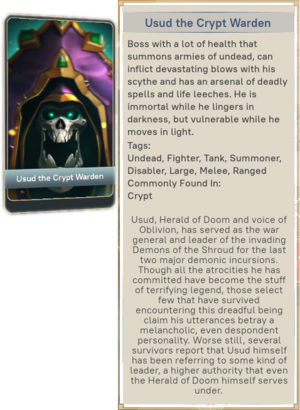 Usud, Herald of Doom and voice of Oblivion, has served as the war general and leader of the invading Demons of the Shroud for the last two major demonic incursions. Though all the atrocities he has committed have become the stuff of terrifying legend, those select few that have survived encountering this dreadful being claim his utterances betray a melancholic, even despondent personality. Worse still, several survivors report that Usud himself has been referring to some kind of leader, a higher authority that even the Herald of Doom himself serves under.

Usud the Crypt Warden can be found in the following Campaign : Of Light and Darkness

Usud the Crypt Warden is involved in the following hunts: